When it comes to the science of cannabis, there’s a popular notion — and then there’s what the research actually tells us. The popular conception gets a lot of reinforcement in casual conversation and in the media. Comedian and noted cannabis aficionado Seth Rogen, for instance, last year released a trio of “strain-specific” mixtapes of his favorite music, in which the sativa LP featured upbeat music, the indica album contained “super mellow music,” and the hybrid was “right in between.”

But while many casual users still rely on that tripartite distinction, it unfortunately relies on some outdated science, most of which was conducted before cannabis was actually studied in-depth using modern scientific equipment and methodologies.

In the past decade, as this budding industry has taken off, plant biologists, product researchers, and even hobbyists have come closer to discovering what actually accounts for the difference in cannabis crops. And what they’ve learned seriously complicates the sativa-indica picture many of us are familiar with.

With that in mind, here’s what the terms “sativa” and “indica” actually mean — and why science tells us you should probably ignore that distinction.

The real difference between sativas and indicas

Hence, the two types of cannabis we’re familiar with.

But this superficial phenotypic distinction between the species has given rise to a number of myths about cannabis, namely the idea that sativa is more of an “upper,” while indica works more as a “downer.” Some sellers will recommend using sativas for a more energizing and social experience, and saving indicas for relaxation and a “body high.” There’s just no scientific evidence for those claims, however. And, objectively speaking, with the amount of cross breeding or “Hybrids” hitting the market, it’s hard to even differentiate what is Sativa or Indica-dominant anymore.

In fact, there’s not even scientific consensus that there are sufficient differences between plants in the genus Cannabis to justify breaking it down into two species. To further muddy the waters, some plant biologists think there may be as many as five cannabis species. Either way, there’s general agreement that the sativa-indica distinction isn’t a particularly useful one.

All this isn’t to say that there isn’t any difference between cannabis plants, because there absolutely is, but the differences aren’t the result of a scientifically-suspect, superficial distinction.

The real difference between cannabis strains comes down to the levels and ratios of the chemicals cannabidiol, or CBD, and tetrahydrocannabinol, better known as THC. These are the primary psychoactive agents in cannabis (though the plant is thought to contain dozens or maybe even hundreds of cannabinoids). Broadly speaking, THC is responsible for the intoxicating and even psychoactive effects you’ll find from ingesting cannabis. It can also be responsible for some undesirable effects, like anxiety or increased appetite. The mechanism by which THC achieves these effects is by binding with and activating the body’s cannabinoid receptors.

CBD, by comparison, is thought to be responsible for the pain-relieving and calming effects associated with cannabis. The science is still out on the proposed mechanism of action for these effects, but it has been observed that CBD serves as an antagonist (meaning it decreases activity) of those same cannabinoid receptors that THC binds with. For that reason, CBD in weed can actually counteract the effects of THC.

The upshot is that whatever one’s purpose for using cannabis, whether it be recreational or medical, it’s important to evaluate potential strains not on the basis of whether they’re “sativa-dominant” or “indica-dominant,” but for their amounts and ratios of CBD and THC.

The sativa-indica-hybrid distinction is ultimately too broad a categorization to account for all the natural and human-cultivated variation found in cannabis. Even strain-labeling may not be sufficient, given that two children of the same plant, with the exact same DNA, grown in different parts of the world will interact with their environment to take on different characteristics.

Ultimately, what the cannabis industry may need to account for all this variety is, to steal a term from the wine world, a notion of terroir. “Terroir” refers to the distinct taste associated with wines from a certain place. The causes of these differences are not just soil or weather or local farming practices individually, but the sum total of all those geographic particulars and more. While these differences are complex and still not completely accounted for scientifically, there’s enough empirical evidence to think that terroir is a real phenomenon not just for wine, but also for cannabis. 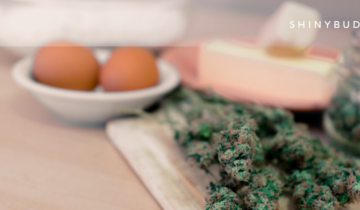 Origins of 4/20 with ShinyBud Cannabis Co.